Erie Canalway: Add This to Your Travel Bucket List

Add the Erie Canalway, 8th wonder of the world in the 19th century and navigable National Historic Landmark, to your bucket list.

The legendary waterway delights and enchants outdoor enthusiasts. Get on the water with boat, kayak, or canoe. Bike, hike, or run along the Canalway Trail, part of the 750-mile Empire State Trail.

The legendary canalway also delights and enchants those who travel via car through the Erie Canalway National Heritage Corridor.

Driving allows you to explore, experience, and be inspired by the arts, culture, and community in a leisurely, thoughtful, meaningful way.

Sure, the New York State Thruway can speed you across the state in an easy one-day drive.

But this journey isn’t about efficiency.

This journey is about discovery.

Then, it’s about understanding: 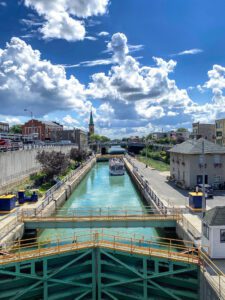 So here’s how a sudden change in perspective inspired our Erie Canal odyssey:

In August, we popped into Lockport, home to hot-spot Steamworks Coffee Roasters. We’d been there countless times since moving from our hometown, San Francisco.

Lockport is also home to Locks 34, 35, and the fabled Flight of Five Locks. This time, unlike previous times, we serendipitously saw a boat locking through.

Suddenly, seeing this centuries-old technology in action captivated us. Surprisingly, our perspective promptly changed from “Oh, okay” to “Oh wow!”

Soon, we set out to learn why and how the Erie Canal creates impact.

Erie Canalway: An Overview of Flow

The Erie Canal flows 363 miles long and countless smiles wide. This liquid path of blue forms a “Main Street” in renaissance today from the 19th-century heyday. It connects:

Our first itinerary took us west to east, like Governor DeWitt Clinton sailing aboard the Seneca Chief on Opening Day, October 26, 1825.

Go in any direction you choose. For as long or short a trip as you like.

Because there’s something special – and someone special – to discover everywhere along the Erie Canal.

Ready? Buckle up, and let’s go!

Early morning, with piping-hot coffee placed in cupholders, head out along the back roads of upstate New York. 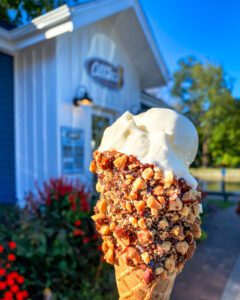 Visit the Rochester Museum and Science Center where the hands-on canal exhibit playfully shows how the locks work. Don’t let the formal name fool you. Science is super fun here in the high-touch Adventure Zone!

In posh Pittsford, board the Sam Patch replica packet boat for a scenic 90-minute cruise through Lock 32. Keep your eyes peeled for blue herons and other wildlife.

The modern Del Monte Lodge Renaissance Rochester Hotel and Spa in Pittsford is the premier choice for location and luxury.

The Erie Canal Museum in Syracuse is a must-visit. Housed in the 1850 Weighlock Building, the museum delivers excellent education with ample colour. Tour both floors. Walk through the full-size Frank Buchanan Thomson replica canal boat. Visit the Locktender’s Garden.

Gateway to the Getaway Region, Utica revitalizes its present with public art projects, a dynamic culinary scene, and diverse community.

Landmarks like Union Station (housing the nicest Department of Motor Vehicles ever) and spectacular 1928 Stanley Theatre renew the Erie Canalway past for present times.

The gorgeous Doubletree by Hilton Hotel Utica elegantly expresses the city’s rebirth. Today, after decades of decay, this downtown gem gleams anew after a beautiful and thoughtful restoration.

Schoharie Crossing State Historic Site in Fort Hunter is a treasure trove. Thrill your inner archaeologist with all three Erie Canalway eras and the Schoharie Aqueduct ruins. Additionally, the Visitors Center offers interactive displays and a super-cool scale model of the aqueduct.

The dramatic Amsterdam Castle, an 1895 armory transformed to a hotel and restaurant, presents European-inspired ambience for the evening’s respite.

Welcome to the Capital Region, the vibrant heart of New York State power, politics, civics, and culture for four centuries and counting. To begin with, tour the mightily magnificent Capitol, completed in 1899, with its “million-dollar staircase” of Medina sandstone (no doubt brought from Western New York via Erie Canal barge).

When you head out from Albany, visit three special Erie Canalway communities: Cohoes, Troy, and Waterford.

Finally, Waterford marks the Erie Canalway’s eastern terminus. It connects the canal with the confluence of the Mohawk and Hudson Rivers.

The Renaissance Albany Hotel makes a central base for exploring the Capital Region. Its setting, right at the foot of the State Capitol, is splendid. Its style, a blend of historic heritage and modern luxury, superb.

Erie Canalway: The Heart and the Hope

The Erie Canalway’s heart is people. Hospitable and proud ambassadors of the canal, canal culture, and canal community.

It’s as if waves of hope are flowing through the canal, canal culture, and canal communities. From the biggest cities to the tiniest hamlets.

Experience its heart and its hope.

Get your exclusive curated guide to the best specialty coffee on the Erie Canal.

Yes, I want my coffee guide!